New research shows new ways for engineers to prevent the build up of minerals in power plants and possibly use salt water instead of fresh water for cooling.

The research, published in the journal Science Advances, shows unusual phenomenon in which crystal structures formed from evaporating drops of water saturated with sodium chloride self-eject from heated, superhydrophobic surfaces. The texture of a materials surface at the micro and nano-meter level changes the shape of salt crystals (liquid marble made of extremely salty water) that form as water evaporates. Researchers call these salt crystal structures “crystal critters” because of their eerie resemblance to land-bound animals.

Other than being weirdly cute and amusing, the crystal critter effect has profound implications for turbomachinery component design. These crystal structures (or critters) have minimal contact with the substrate and thus pre-empt crystal fouling. This revelation can help advance extreme antifouling systems for spray cooling of hot surfaces using concentrated brines produced during desalination. The research can even help power plants to one day use salt water from the ocean instead of precious and increasingly scarce fresh water.

As a coolant, water is placed in contact with hot equipment, such as a pipe, boiler, or reactor. When that water is evaporated, contaminants precipitate at the point of evaporation. Over time, the mineral buildup creates blockages, reducing heat transfer performance. This results in mineral fouling. a leading cause of equipment degradation and failure in heat exchange processes. Fouling phenomena are common in different industrial environments, ranging from ship hulls, natural surfaces in the marine environment and fouling of heat-transfer components.

A lot of resources go into pretreatment of coolant water by using technologies such as ion exchange and reverse osmosis. Because fresh water is so important to society at large, water for thermoelectric cooling is increasingly sourced from natural saline sources or from desalination waste brines.

The researchers write in Science Advances, “This [crystal critter] effect is also of interest for drop levitation/transport applications, which have traditionally been accomplished by heating surfaces to temperatures far in excess of the fluid boiling point. In such Leidenfrost levitation, evaporative flows create a lubricating vapor cushion between the drop and surface. In contrast, the critter effect occurs at much lower temperatures (60° to 100°C) than previously observed in both the traditional Leidenfrost effect (200°C) and even for cold-regime Leidenfrost on superhydrophobic materials (~130°C) (23–25). We demonstrate that this low-temperature ejection is accomplished via cooperative effects of crystallization, evaporative flows, and nanoscale phenomena.” 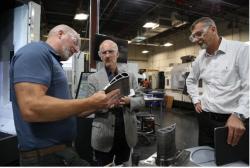