Boosting capacity at a compression plant

Two multistage 16,000 HP electrical motors are used to drive two onshore gas compressors feeding a gas plant commissioned in 1984. These compressors needed to produce gas at a higher capacity. Unfortunately, the existing units were unable to meet the new demand. One option considered was purchasing and installing an additional compressor.

As the plant receives gas from two different associated crude oil fields that are producing different API oil grades, changing gas MW is prevalent due to the number of online producing wells. Understanding the effect of changes in gas molecular weight can enhance performance prediction and capacity control of centrifugal compressors.

In addition, inlet temperature and pressure have significant impact on centrifugal compressor performance. The required system polytropic head and differential pressure are indirectly proportional to molecular weight. Generally, centrifugal compressors operating at higher molecular weight than design are able to deliver higher actual volumetric flow rate at the new gas condition. But at a lower molecular weight, more head needs to be developed by the compressor to achieve the mandated head. Therefore, the inlet flow rate would need to be decreased, moving to the left on the Head-Flow curve, to satisfy higher head requirements.

To assess existing compressors for the new conditions, a site performance test was conducted. It revealed that the onshore compressors could handle an additional 5% capacity. When added to offshore compressor capacity, this enabled the facility to meet the new requirements by expanding an existing jump-over line that connects the feed stream header.

The compressor was operated at five different flow rates but stopped before the choke region as the targeted flow was achieved and to prevent any negative impact on the downstream compressor performance (Figure 3).

To estimate the impact of MW changes in the available compressor flow, a correlation was used to calculate the compressor inlet flow rate by accounting for flow measurement corrections based on internal company procedure. Therefore, it is imperative to draw a correlation formula between the flow element design conditions to the actual measured gas conditions. It is known that the compensation or correction of flow measurements are common pitfalls that could be major sources of errors in site tests (Figure 4).

The current onshore compressors at the given average MW of 27 g/mole are capable of exceeding the required new flow demand. The business needs for an additional compressor were substituted by full utilization of existing available compression capacity at adjacent units which also acts in line with company circular economy. It is obvious that the new rated point per each compressor is conservatively 5% more capacity available than the design point. This is based on an average MW of 27 g/mole. Also, the motor has enough horsepower to run at the new capacity required and new molecular weight. As a result, their was no need to add a new compressor with all associated auxiliaries, resulting in significant capital savings. 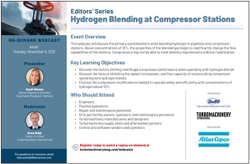