Gearbox specs: Getting it right

The size and therefore the price of a gearbox depend on the gear-rating method specified. This comparison of eight commonly used standards published by the American Petroleum Institute (API), American Gear Manufacturers Association (AGMA) and the International Organization for Standardization (ISO) highlights the differences between them. Let us begin with a brief description of these standards:

API 613 5th edition (2003): Special Purpose Gear Units for Petroleum, Chemical and Gas Industry Services. Since its initial publication in 1968, most of the main gearboxes in refineries have had to conform to this specification. If you specify this standard, you will probably pay substantially more for the gearbox than if another standard is used. API 613 covers not only gear rating, but also related lubricating systems, controls, and instrumentation. The conservative rating stems mainly from basing the material allowable stresses on the lowest grade materials (grade 1) from the American Gear Manufacturers Assn. (AGMA) standard that was in effect in 1977, even though use of the better “grade 2” materials is now required. Although AGMA material-allowable stresses have increased over the years to reflect increasingly stricter metallurgical requirements, improved metallurgy and extensive field experience, the API ratings have remained unchanged.

The sixth edition of API 613 is currently in development, and should be published sometime this year. It will not change the basic rating method or material allowables. However, it does incorporate language to allow the use of alternate rating methods if the API method would result in excessive pitch line velocity or excessive face width.

ANSI/AGMA 2001-D04 (2004): Fundamental Rating Factors and Calculation Methods for Involute Spur and Helical Gear Teeth. AGMA 2001 and 2101 (the metric version) are the basic AGMA gear-rating standards that most other AGMA rating standards are based on. They have evolved from standards originally published in 1946. The user is given some flexibility in selecting the values of the factors to be used, so even given complete information on a gear set, two engineers may come up with different ratings. Therefore, specific application standards, such as API 617 part 3, AGMA 6011, or AGMA 6013, provide guidance on selecting the factors to be used in the rating.

ANSI/AGMA 6013-B16 (2016): Standard for Industrial Enclosed Gear Drives. This standard generally does not apply to high-speed turbomachinery, but is included for comparative purposes. It presents general guidelines for design, rating and lubrication of parallel, concentric and rightangle shaft drives, but here we will only consider rating of parallel-shaft gearboxes.

This standard only applies when the pitch line velocity does not exceed 35 m/s (7,000 ft/min). It specifies that ANSI/AGMA 2001- D04 is to be used for the rating, but provides the specific factors to be used. The rating is for 10,000 operating hours using the least conservative life factors.

High-speed gear sets ANSI/AGMA 6011-J14 (2014): Specification for High Speed Helical Gear Units. The first high-speed gear unit standard was adopted in 1943 and has evolved over time. It is now based on ANSI/AGMA 2001-D04, and applies when the pitch-line velocity exceeds 35 m/s. The designer has some limited choices when rating a long life gear set. The rating is for a minimum of 40,000 operating hours, using the most conservative stress cycle (life) factor. If the number of stress cycles exceeds the stress cycle factor graph endpoint, the user has the option of using the graph end point or extrapolating the curve to lower values.

ISO 6336-2006 [except part 5 is 2003]: Calculation of Load Capacity of Spur and Helical Gears. This standard, which is composed of five separate parts, is largely based on prior DIN (German Standards Institute) standards, and is generally accepted everywhere outside of the U.S. The AGMA Helical Gear Rating Committee has been working for many years to revise AGMA 2101 to align it with ISO 6336, but because of large philosophical differences between these standards, unification is still years away. Yet despite the differences between the AGMA and ISO rating methods, the gear ratings are often similar. The ISO working group is currently revising Parts 1 – 3, and a new edition might be published in about a year.

API 677 3rd Edition (2006): General- Purpose Gear Units for Petroleum, Chemical and Gas Industry Services. This was first published in 1989, and used a modified K factor rating method. The 1997 second edition changed the rating method to that given in API 613.

The gear sets used in this comparison are presented in Table 1, with changes between sets highlighted. All are alloy steel. Speeds range from 700 to 45,000 RPM. The resulting ratings range from 200 to over 18,000 HP. An even wider range of gears could have been analyzed, but that probably would not significantly change the general conclusions of this study. Note that the values and factors chosen are sufficient for the purposes of this study, but they were selected for simplicity; they do not represent actual gears in production and should not be used as a recommendation or guide for gear design.

Figure 1 shows the pitting (surface durability) power rating and Figure 2 shows the bending strength ratings, with each line representing one gear set. Figure 3 shows the overall rating, which is simply the lower of the pitting and bending rating. For case- and surface-hardened gears, there is about a two-to-one ratio from the highest to lowest ratings for a specific gear set. This is a staggering difference. The API 613 ratings are consistently the lowest, both for bending and pitting. The highest ratings come from ISO 6336 and ANSI/AGMA 6013, though the inclusion of 6013 may be a bit unfair since it uses stress cycle factors for only 10,000 hours of operation. All other AGMA ratings are fairly consistent.

Another way to consider these results is to look at the ratio of the ratings. The ANSI/AGMA 2001-D04 rating was arbitrarily chosen as the basis of Figures 4 to 6, where each line represents one rating standard.

For the pitting ratings, all ratings that use AGMA methods as their basis are consistent. API 613 ratios show a lot more variability (30%) due to factors in the AGMA standards that API 613 does not use. For the surface and case-hardened cases, ISO 6336 ratios show less variability than API, even though the rating method is substantially different from AGMA 2001.

The major change comes with a change in material; ISO rates through-hardened steels far lower than AGMA. This may be due to historical differences, particularly cleanliness, between the through-hardening steels used in Europe and those used in the U.S.

Rest of the article is in the Turbomachinery Handbook 2017 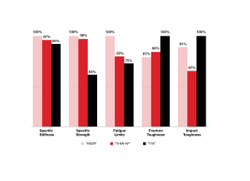 High-strength, corrosion-resistant steel can be an effective alloy alternative

Contamination of gas seals by particles