In this article, we will explore how nuclear is gaining traction, why it matters, and the implications for turbomachinery utilization. Mobile power gas turbines are on the rise. Small Modular Reactors (SMR) are a mobile nuclear powerhouse assisted by a steam turbine for power generation. SMRs are being developed by companies like Rolls Royce to supply large amounts of power to operators who need it off-grid. The US Office of Nuclear Energy has been piloting a program since 2019 to develop nuclear including supercritical CO2 in the process. A report by Nucleareurope shows why Europe is leading the way for SMRs, opening the market for steam turbine manufacturers like Doosan Škoda and De Pretto Industrie. Current trends indicate a ramping up of nuclear, which subsequently acts as an impetus for the further use of steam turbines.

Rolls Royce’s steam turbine supported, transportable SMRs are just one in a recent global trend towards more realistic renewable solutions. According to one report, a single SMR can provide between 220 MW to 440 MW, which is equal to 150 wind turbines. The name modular implicates it can be transported by truck, train, or boat because it is much more compact than a normal reactor. Their model runs 16m (52 ft) high by 4m (13ft) wide. Rolls Royce promises the reactors last up to 60 years.

The US government is piloting further advancement of small modular reactors. Through the Office of Nuclear Energy, a new Advanced SMR R&D Program began in 2019. It envisions a high temperature gas-cooled reactor (HTGR) which provides electricity and process heat. Another such program is Advanced Reactor Concepts (ARC), which seeks to develop nuclear fission using coolants such as liquid metal, fluoride salt, or gas. This program wants to use supercritical CO2 to vastly improve conversion efficiency and reduce plant size. Overall, these government initiatives show how much interest there is in making widespread nuclear applications more feasible. SMRs are one of those pathways.

According to a report by Nucleareurope, one of the chief drivers for the current interest in nuclear energy is energy security. Europe, in the current climate, lives on a power island where self-sufficiency is key to longevity. Nuclear being renewable means proponents of green technology can rest easy, as nuclear power generation produces next to zero greenhouse gas (GHG) emissions. It also has the aforementioned advantage of plant to power efficiency compared to other renewables. It seems energy independence and decarbonization are both in reach with further investment into nuclear technology and SMRs.

On this tone, Canada is directing C$970 million towards SMRs. This stands as one of the most significant recent national efforts to develop the technology. 15% of Canada’s power is derived from nuclear. It’s all thanks to a new initiative from the country’s clean power funds, which recognizes the importance of nuclear power in a balanced energy landscape. The reactors being used are designed by GE Hitachi Nuclear Energy, in the tone of SMRs like the BWRX-300.

With power and resources becoming ever more tentative, the global decarbonization conversation has shifted from solar and wind to more powerful solutions. The line of SMRs from GE-Hitachi Nuclear rival the cost-effectiveness of natural gas plants. Steam turbines are critical in the process to make the plant useful for power generation. With the newfound interest in nuclear, and the shift in philosophy regarding what is Green, research and market movement for nuclear and steam turbines are up. Reducing dependence on natural gas, wind, and solar will increase grid stability and reliability. Countries investing into alternatives like nuclear have a smoother time coping with supply chain disruptions thanks to the fallback opportunity created by those investments. 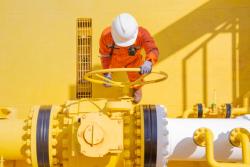