Real-world operational turbomachinery problems can be challenging. Fast decision making is often required. The questions such as “what to do now?” and “how do we deal with this issue?” during live operation can be difficult to answer. It is important to be prepared.

Temperature limits inside a compressor are dependent on compressor design, material selection, and component manufacturing and process gas properties. Mechanical considerations usually differ from compressor to compressor. As a rough indication, temperature limits associated with mechanical design could be about 210°C. However, sealing elements and non-metallic components might limit the gas temperature to around 175°C. But some gases should be kept lower than these temperatures based on process requirements.

For example, polymerization could be a concern for some gases. If gas temperature passes the limit, polymerization can result in fouling or unbalance masses on impellers which could cause performance deteriorations, long-term vibration, and operational problems. For some process gases, the process limit on temperature could be somewhere between 80°C and 140°C.

A centrifugal compressor with a high flow side-stream was located at the downstream of a complex gas drier system. The side-steam flow was around 3.5 times the main suction flow. During operation at night, a malfunction in the gas drier system raises gas temperature around 40°C compared to normal operation. The compressor experienced a sharp increase in suction temperature. As a result, compressor vibration increased by around 10%, requiring operation team and machinery engineer attention.

Based on measured data, operating parameters were not beyond limits except for the suction temperature. However, there was a concern about high temperatures inside the compressor. An operator recommended tripping the compressor to prevent damage due. The trip was not approved by the machinery engineer and the shift operation leader. Their assessment was that the internal temperature had not passed the limit and any trip could cause a thermal shock in the compressor internals. It would also interrupt production. The operations team acted quickly and corrected the problem in the gas drier system within seven minutes. Suction temperature and vibration levels returned to normal with no sign of damage or malfunction. Additionally, it was confirmed that process gas was not polymerized.

The lesson learned from this event: When the side-stream flow is considerably higher than the main flow, the suction temperature alarm requires careful attention since there could be a possibility that internal temperatures reach a high level and pass the limit while the final discharge temperature may only show a small rise due to the cooling effects of the incoming large volume of side-stream flow.

For an alarm case when all operating parameters are still within allowed limits, the general recommendation is not to shutdown machinery. In the case of increased gas suction temperature for a short time when no parameter passes its limit, the recommendation is to continue operation unless there is a reasonable evidence of the need for a shutdown. 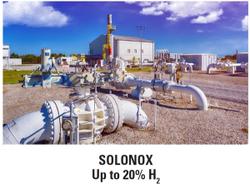