A vertically split casing with a heavy bolted head is a classic configuration for medium pressure centrifugal compressors. However, this is not practical for high-pressure turbocompressors because there is not enough space on the casing head for the heavy bolts required. The common configuration for modern high-pressure turbo-compressors is the shear-ring cover head that eliminates the bolts at the compressor head. The end covers are retained by the shear-ring segments. The casing is generally forged from a suitable grade of steel.

High-pressure turbocompressors generally use closed-type three-dimensional impellers. Both the efficiency and the pressure coefficients are higher for three-dimensional impellers compared to conventional ones. Impellers are usually manufactured from low-alloy steels. In-depth material and metallurgical investigations are needed to examine and evaluate the material integrity regarding various failure modes such as sulfide stress cracking (SSC) and others.

One of the major problems is that even after the transition of the gas to the dense phase, water can drop out if the gas is sufficiently cooled. For instance, SSC can occur in minutes if a susceptible material under sufficient stress is exposed to a wet sour condition in any wet upset.

For high-pressure turbocompressors, the thrust force generated in the impeller assembly is much greater than can be handled in a thrust bearing. Therefore, the thrust forces should be balanced by using double-entry impeller series (a back-to-back arrangement) and balance piston(s). A recommended configuration is a back-to-back impeller arrangement with two balance pistons. The remaining axial (thrust) force is the difference between the forces which are a magnitude larger. A double-acting tilting-pad thrust bearing should be used.

The shaft-end seals in modern high-pressure turbo-compressors are generally dry-gas seals. Oil seals were used in older machines but are no longer used because of issues such as high power losses, low reliability, oil contamination, and other operational problems. The high pressure presents unique challenges to dry-gas seals. There are only a few dry-gas seal sub-suppliers with good working references for high-pressure services.

The first case study involves a high-pressure turbocompressor with a discharge pressure of around 210 Barg and a driver power rating of around 18 MW. It has two casings and is driven by a two-end electric motor. This train employs a variable speed drive to operate at 75%–106% of its normal speed. This offers an excellent operational flexibility, reliability and performance.

The second example involves a two-barrel, high-pressure centrifugal compressor. The train consists of a medium-pressure (MP) casing, a high-pressure (HP) casing, 11 MW electric motor driver, and step-up gearbox units. The MP casing (six impellers) receives the gas at around 100 Barg and delivers it at around 225 Barg to the HP casing (five impellers). The HP casing compresses the gas to the final pressure of around 500 Barg.

The third case study involves a complex gas turbine-driven, high-pressure centrifugal compressor for a 580 Barg gas injection service. The train consists of a gas turbine (31 MW), gear unit (the speed increased to around 10,000 rpm), and three compressor casings. The gas pressure increases from 35 Barg to 170 Barg, 360 Barg, and then 580 Barg in three stages (LP, MP, and HP stages). For the MP and HP sections, discharge temperatures are limited to 110°C to reduce the harsh effects of gas, considering the available material technology and long-term reliability required. 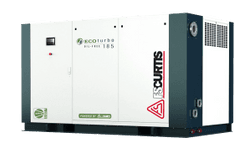